Noida: The Indo French Culture is revived with the visit of two important French national who have worked so much on the arts and crafts of India in France.

“I met Dr. Raghunath Manet at Cannes International Film Festival in May 2019 and he promised me that he will visit Noida Film City whenever he is in India. I am impressed by his commitment,” said Dr. Sandeep Marwah Chancellor AAFT University welcoming the guest.

Raghunath Manet is an Indian classical musician/music composer and dancer/choreographer born in the Union Territory of Puducherry and now resident of France. He is trained in Bharathanatyam and plays the Veena, a Carnatic instrument. He has collaborated with American Jazz musician Archie Shepp, American dancer Carolyn Carlson, French performers such as Richard Galliano, Didier Lockwood and Michel Portal.

“I am amazed by the activities of Dr. Marwah; he is the real Ambassador of Indian Art and Culture. I have heard about him from different international sources. I am luck to be part of his team,” said Dr. Raghunath He was accompanied with Marie Helene Miermont From French Civil Aviation Industry.

A radio program on Radio Noida 107.4Fm and a television interview at MSTV was recorded at Marwah Studios can be heard in France. Later Dr. Sandeep Marwah honored and presented Dr. Raghunath with life membership of International Film And Television Club of AAFT University.

Wed Aug 14 , 2019
New Delhi: On the invitation of Dr. Sandeep Marwah President International Chamber of Media And Entertainment Industry A powerful media delegation visited the international headquarters of ICMEI at Marwah Studios. “We are more than excited to note that an Indo China Cultural Forum has already been part of ICMEI under […] 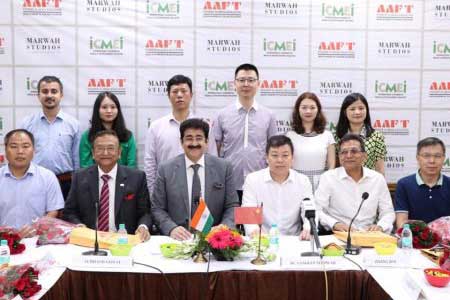