Noida: The visit of Kenko Sone Minister Economic & Development of Embassy of Japan to the International Head Quarters of ICMEI brought new energy into the relation between Inter National Chamber of Media And Entertainment and Embassy of Japan.

“We are already dealing with Japanese performers related to arts and culture and have been lucky to host some powerful events in last few years. We are open for more activities in the coming months. Indo Japan Film And Cultural forum is already in touch with Japanese foundation,” informed Dr. Sandeep Marwah.

“We are ready to extend our hand in joining with ICMEI and Marwah Studios for further enhancing our relations between India and Japan through art and culture,” said Kenko Sone Minister Embassy of Japan.

Sandeep Marwah honored and presented life membership of International Film And Television Club of AAFT to Kenko Sone and Tonoko Wada to be part of Indo Japan Film And Cultural Forum. 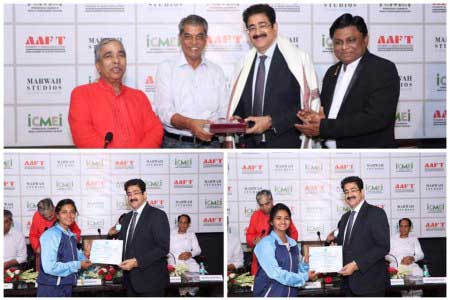