New Delhi: The sports field of The Heritage School, Vasant Kunj was resplendent with glory as it hosted a friendly soccer match between GURULAC (Group of Latin American and the Caribbean Countries) versus rest of the World. The unfurling of the Flags of participating countries gave vivid hues to the horizon of The Heritage School, Vasant Kunj premises.

The Soccer match was organized by Fauzia of Cultural GURULAC India in association with AAFT University, International Chamber of Media And Entertainment Industry and Marwah Studios.

The event started at an auspicious note with presentation of a “Ganesh Stuti” by the School Alumni followed by the display of cultural diversity through a conglomeration of varied dance styles presented by the Students of an NGO “ Sarvam”.

With head held high and a confident smile on their face, the two teams marched into the ground and shook hands with each other. The match commenced soon after the “ National Anthem”.

The match was played in “Friendly Spirit of the Game” and winning and losing was not relevant to the objective behind the event. It certainly generated goodwill among the participating nations.

Mon Jul 22 , 2019
Noida: Excitement spread out in the whole campus of AAFT University when the news of winning by Vidisha Baliyan, a modeling student from AAFT, the international tittle of Miss Deaf World 2019 at competition at South Africa on Friday. “AAFTian Vidhisha Baliyan, a 21-year-old girl from Uttar Pradesh, became the […] 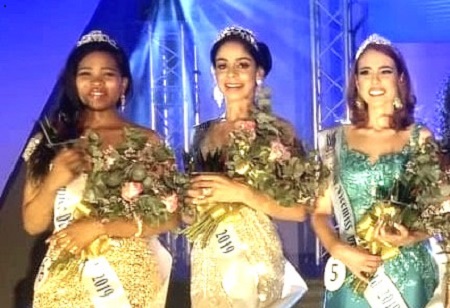