Busan: “We are the largest   film industry in the World. We produce more than 2000 films in 28 official languages. There are 12000 theatres in India and 15 million people watch cinema every day. We sell 5 billion cinema tickets every year.,” said Dr. Sandeep Marwah President of International Chamber of Media And Entertainment Industry during World Education Leaders Forum meet at World Cultural Camp at Busan University in South Korea.

Media And Entertainment Industry also includes 900 television channels, 30,000 newspapers and magazines, 350 Radio Stations and One Billion mobile phones out of which 25 percent are smart phones in India. The media arts and Entertainment industry has employed 6 million workers. The turnover of this industry has crossed 20 billion US Dollars and expected to be 28 Billion Dollarrs in next       2/3 years.

“Films are the real mirror of the culture of any country, these kind of cultural camps at International levels such as organized by International Youth Fellowship brings lots of love, peace and unity among countrymen and people from different nations,” added Dr. Sandeep Marwah.

Fri Jul 12 , 2019
Busan: The representative of Republic of India in World Cultural Camp at Busan, South Korea Dr. Sandeep Marwah received thundering response on his announcement of scholarships for the deserving students from all over the World. “I take this wonderful opportunity to announce 14 scholarship of short term course of AAFT […] 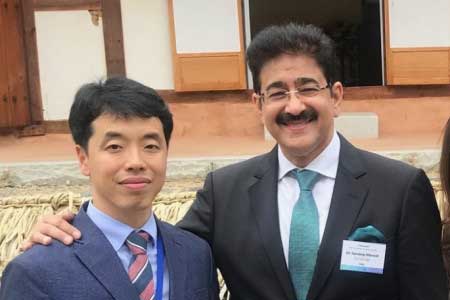