Noida: Olympic Day was introduced in 1948 to commemorate the birth of the modern Olympic Games on 23 June 1894 at the Sorbonne in Paris. The goal was to promote participation in sport across the globe regardless of age, gender or athletic ability informed Dr. Sandeep Marwah President of AAFT University and Patron to Indian Federation of United Nations Associations.

Olympic Day is celebrated all around the world: hundreds of thousands of people – young and old – participate in sports activities, such as runs, exhibitions, music and educational seminars.

“Olympic Day is nowadays developing into much more than just a sports event. Based on the three pillars “move”, “learn” and “discover”, National Olympic Committees are deploying sports, cultural and educational activities,” said Paul Song Director of International Youth Fellowship Korea based in Delhi.

“Some countries have incorporated the event into the school curriculum and, in recent years, many NOCs have added concerts and exhibitions to the celebration,” added Kim Soo Yeon Director International Youth Fellowship, Korea.

Commemorating the birth of the modern Olympic games, Olympic Day is not only a celebration, but an international effort to promote fitness and well-being in addition to the Olympic ideals of Fair Play, Perseverance, Respect and Sportsmanship.

Wed Jul 3 , 2019
Noida: International Chamber of Media And Entertainment Industry invited Officers from High Commissioner of South Africa to discuss further as to what more can be added to the current affairs of the forum. Indo South Africa Cultural Association was proposed and inaugurated by then the special guest of President of […] 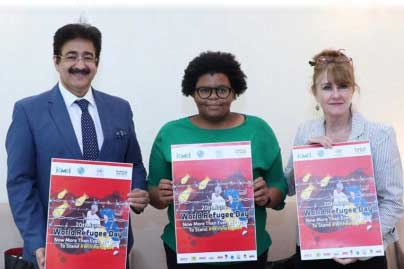