Noida: International Chamber of Media And Entertainment Industry in association with Embassy of Peru in India and AAFT University of Media And Arts together will plan more cultural activities under Indo Peru Film And Cultural Forum.

The Second Secretary of Embassy of Peru in New Delhi, Fabio Subia visited the office of ICMEI to discuss the future plan of IPFCF- Indo Peru Film And Cultural Forum. It was decided to have a musical recital by the Peru Group at   Noida Film City.

Sandeep Marwah also offered to cut the disc of   this visiting group during their stay in India. “We are keen in releasing the music of Peru Group, we will record and release their music disc as part of the forum activity,” said Sandeep Marwah President of Marwah Studios.

“We are thankful to AAFT and ICMEI for hosting the show in the coming month, and beautiful offer to cut the disc. This will bring great awareness   of our relationship to people of both the countries,” said Fabio Subia.

Sat Jun 29 , 2019
New Delhi: Sandeep Marwah Founder and Chancellor of AAFT University of Media And Arts honored with BSC Ratna Award for launching the first film University of the country. The award was announced on 6th June at Hotel Lalit and presented by the India’s Minister of State for Human Resource Development Dr. Satyapal Singh. […] 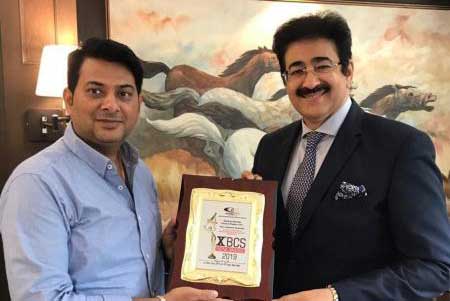