The delegation congratulated the minister for being nominated as part of the Union Government and invited him to be the Chief Guest for the coming Conference of MODI 2.0: Foreign Policy & Security Issues.

“I am pleased to meet the delegation of GCTC and happy to note that they are working on the national issues. We are open for new ideas and suggestions from different organizations,” said Gajendra Singh Shekhawat.

“We have lined up few important seminars which need Minister and his   participation from the ministry,” said Dr.Sandeep Marwah Chancellor of AAFT University of Media And Arts.

Adiya Tikoo Secretary General of GCTC thanked Minister for the precious time, and Ashwani JP Singh for arranging this meeting. The registration for the seminar has already started.

Fri Jun 21 , 2019
New Delhi: A delegation of members of     PHD Chamber of Commerce under the leadership of Rajiv Talwar President of PHDCCI met Prahlad Singh Patel the State Minister of Culture and Tourism, Ministry of Culture, Government of India at Transport Bhawan New Delhi. The members of PHDCCI congratulated the Minister for […] 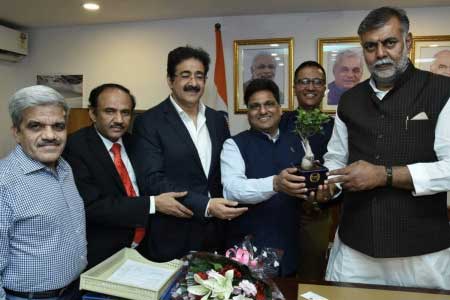