New Delhi: A musical evening was organized by Malhaar Sangeet Kala Kendra and Raj Kapoor Legend Group under the leadership of Rameshwar Kumar in the memory of Late Raj Kapoor a great film maker of Indian Film Industry to mark respect on his death anniversary at Lajpat Bhawan.

“I knew Raj Sahib from 1982 to 1988, in all these years I learned two things from him and his way of working: one that love your work so much that people will start loving you automatically and second what ever you do that it should be with total devotion and you should be deeply into it,” said Sandeep Marwah President of Marwah Studios addressing and recollecting his interactions with Raj Sahib in the capacity of Chief Guest.

Many singers from all over India presented the show and sang numbers from the feature films of Raj Kapoor. The audience was overwhelmed with the old numbers and perfect live music by DoReme Band.

Raj Kapoor is regarded as one of the greatest and most influential actors and filmmakers in the history of cinema and known as “the greatest showman of Hindi cinema”. He received multiple accolades, including 3 National Film Awards and 11 Filmfare Awards in India. The Filmfare Lifetime Achievement Award is named after Raj Kapoor. He was a two-time nominee for the Palme d’Or grand prize at the Cannes Film Festival for his films Awaara (1951) and Boot Polish (1954).

Fri Jun 7 , 2019
Baku: A well-known media person Sandeep Marwah President of Marwah Studios was the special invitee at the India Azerbaijan Meet organized by different business houses of India in association with Embassy of India in Azerbaijan. “I am here to promote films, television, media, Animation, art and culture, tourism, skill development, […] 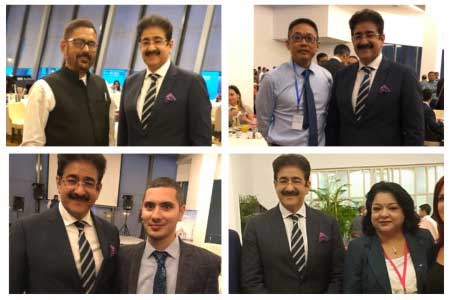