Noida: Global Day of Parents was celebrated at Asian Academy of Film And Television at Marwah Studios, Noida Film City to promote the traditions and culture of India.

“Parental love is the only love that is truly selfless, unconditional and forgiving. We never know the love of a parent till we become parents ourselves. Parents were the only ones obligated to love you; from the rest of the world you had to earn it,” said Dr. Sandeep Marwah President of Asian Academy of Film And Television on the poster launch ceremony on Global Day of Parents at Marwah Studios.

“The depth of the love of parents for their children cannot be measured. It is like no other relationship. It exceeds concern for life itself. The love of a parent for a child is continuous and transcends heartbreak and disappointment,” added Paul Song Director of International Youth Fellowship Korea in the capacity of the Chief Guest of the event.

A father’s goodness is higher than the mountain, a mother’s goodness deeper than the sea- is been propagating by AAFT from time to time. AAFT has also been promoting Love Peace and Unity through art and culture as its prime objective. Indo Korean Film And Cultural Forum of ICMEI supported the event.

Tue Jun 4 , 2019
Noida: All the directors of different schools of AAFT joined hands together to celebrate the World Bicycle day on 3rd June as recommended by United Nations in a joint meeting of   faculty at Asian Academy of Film And Television at Marwah Studios. “The bicycle is a simple, affordable, reliable, clean and […] 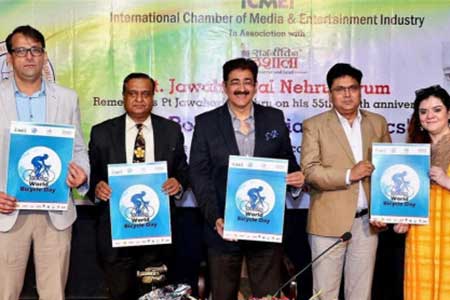