Noida: Every year, on 31 May, the World Health Organization (WHO) and global partners celebrate World No Tobacco Day (WNTD). The annual campaign is an opportunity to raise awareness on the harmful and deadly effects of tobacco use and second-hand smoke exposure, and to discourage the use of tobacco in any form.

“The focus of World No Tobacco Day 2019 is on “tobacco and lung health.” The campaign will increase awareness on the negative impact that tobacco has on people’s lung health, from cancer to chronic respiratory disease and the fundamental role lungs play for the health and well-being of all people.,” said Dr. Sandeep Marwah President Marwah Studios while releasing the poster at Asian Academy of Film And Television.

The campaign also serves as a call to action, advocating for effective policies to reduce tobacco consumption and engaging stakeholders across multiple sectors in the fight for tobacco control.

Sat Jun 1 , 2019
Florence: A warm welcome was extended to Dr. Sandeep Marwah President Marwah Studios by the two brothers Niccolo Ricci and Filippo Ricci at the head quarters of Stefano Ricci, a world renowned   fashion designers from Italy based at the most beautiful city of Florence. Sandeep Marwah visited the international office […] 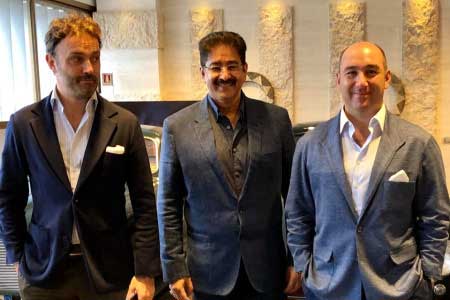