Cannes: Renowned film TV and media personality of Republic of India Sandeep Marwah President of Marwah Studios has been honored with Life Time Achievement Award by A F I World Cinema Initiative at American Pavilion at 72nd Cannes International Film Festival in a grand function.

“Sandeep Marwah may not be that old but his contribution to World Cinema is immense. Founder of Noida Film City, Marwah Studios, Asian Academy of Film And Television, Marwah has brought millions of people together and propagated Love, Peace and Unity through Art and Culture,” said Princess Angelique Monét   President of the organization.

Teacher to 15000 Media Professionals, Producer of Largest number of Short Films 2500, President of 10 best International film festivals in India, Gunnies World Record Holder, recipient of 600 awards from all over World, Chair of 100 film, TV and media organizations and representative of cultural Associations for 50 countries of the World Sandeep Marwah deserves much more than this.

Film producers, directors, educators and representatives of large media companies from all over the World including film lovers were present there to see this glittering and important event of 72nd Cannes International Film Festival.

Sat May 25 , 2019
Cannes: “A Connaught Tail” directed by Salman Mozaffar from AAFT won AFI World Peace Initiative Awards during the 72nd Cannes International Film Festival 2019. It was adjudged the best documentary filmed on Cellphone. “I had the honor to receive on behalf of the Asian Academy of Film And Television the award […] 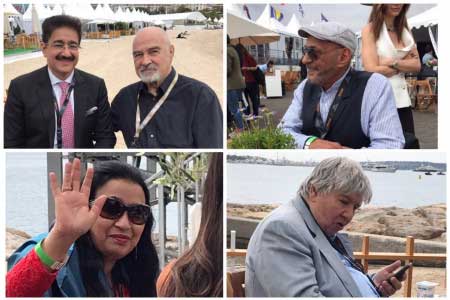