Cannes: “Marwah Studios is the first professional Film Studios of North India. We have churned out 4500 television programs for more than 50 Channel. We are associated with around 150 feature films in 8 different languages. Around 5000 training films have been produced from the studios,” informed Dr. Sandeep Marwah President of Marwah Studios talking to press at Hotel Intercontinental Carlton at Cannes International Film Festival.

Dr. Sandeep Marwah is the founder of Noida Film City the fastest growing film city in the World. The 100 acres complex has 75 acres for outdoor and there are 16 studios in 25 acres of Land. Around 400 Chanels are being broadcast to 162 nations from Noida Film City. Approximately 17000 media professionals are working there in 3 shifs of 8 hours each. The cascading effect is that more than 150,000 people are earning their bread because of Noida Film City.

Cannes Is Centre of Attraction For Film Makers- Sandeep Marwah

Tue May 21 , 2019
Cannes: 72nd Cannes International Film Festival has already become the centre of attraction for filmmakers from all over the World. Who’s who of cinema you can find them here interacting with filmmakers of other countries. Sandeep Marwah President International Chamber of Media And Entertainment Industry had the opportunity to be with […] 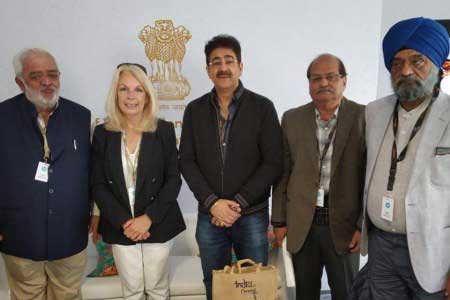