New Delhi: A new social organization to promote India as powerful country of the World, has been framed by a group of people consisting of intellectuals, Ambassadors, Writers, Media persons, Film makers, Artists, Business and Professionals at New Delhi.

Dr. Sandeep Marwah a well-known International media personality has been inducted as Chair for Media & Entertainment Committee as well as Chair for Art & Culture Committee unanimously by the organization. A certificate of honor was presented to him by H.E. Armen Martirosyan Ambassador of Armenia to India together with H.E. Maxwell Ranga Ambassador of Zimbabwe to India in the first meeting of the members at India Habitat Centre, New Delhi.

Dr. Sandeep Marwah is the founder of Noida Film City, well known Marwah Studios and World-renowned Asian Academy of Film And Television. He has been chairing large national and international organizations and recipient of hundreds of awards from all over the World.

Wed May 15 , 2019
New Delhi: Dr. Sandeep Marwah was invited as Chief Guest on the third and the final day of 4th Yogshala Expo organized by Namo Gange Trust at Pragati Maidan, New Delhi. “The art of positive thinking is the key to good health mind and soul. God has been kind to shower […] 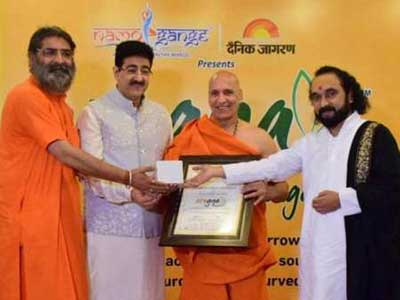