Noida, 17th April 2019 – The 3rd Global Fashion and Design Week (GFDW) commenced on Wednesday morning as Asian Academy of Film and Television (AAFT) under the aegis of President (Asian Education Group) Dr. Sandeep Marwah inaugurated a seminar themed on the relationship between fashion and cinema.

A well known designer of footwear collections Swati Modo was invited to enlighten the enthusiastic students about the role fashion plays in the everyday life of people.

On the topic, knowledge was imparted upon the students by the panellists among whom were Aamir Abdullah acting as the designated host for the event, a faculty from the School of Cinema (SOC) Tripti Chaudhary, the President of AAFT Yogesh Mishra and Swati Modo whose designs have been worn by many models over the years.

“You cannot separate cinema from fashion. It is an integral part of cinema and both the things go hand in hand.”, cited Yogesh on the hand stressing on the fact that fashion makes a film look more colourful and diverse. References of Amitabh Bachchan of his films from the 1970s and 80s were also given when anything he wore or any way he combed his hair became a trend the next day.

The style icon Audrey Hepburn from her iconic movie “Breakfast at Tiffany’s” and the impact it generated on the public for generations to come were among the many topics discussed by Aamir in the seminar.

The seminar also unfolded topics like how the ripped jeans trend came into being, its origin and so forth. Punk as well as the Hippie culture was also breezed upon by the panellists relating them to the original concept of ripped jeans.

Lastly, bringing a close to the event Tripti enlightened the students about the history of jeans and how and why it sprung from normal terracotta and cotton pants taking everyone back to Germany when the workers of factories demanded a much more durable quality pant.

Around the World in Marwah Studios

Tue May 7 , 2019
Noida, 17th April 2019 – Exhibition of different cultures around the world was staged in the form of furniture and textiles inside the ambit of Marwah Studios. Delegates like the High Commissioner of Ghana, Ambassador of Azerbaijan as well as Ambassador of Palestine graced the event with their presence. President […] 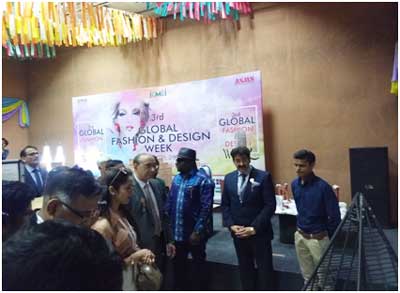