Noida: In a general board meeting of International Film And Television Club of Marwah Studios it was decided to have the third edition of Global Fashion And Design Week Noida 2019 from 17th to 19th April at Marwah Studios premises.

The arrangements have been in the process and a team of 300 people been involved in organizing this great gala international event under the leadership of Dr. Sandeep Marwah, President of the festival who has been already titled as Global Cultural Minister.

The main attraction this time will be the involvement of 300 press and media from all over the World who all have agreed to cover the event in different web sites and mediums.

“We are feeling elevated since we have started Global Fashion Week in this part of the country, with the first one itself we have been rated as one of the best fashion events in the World. The beginning was with the presence of 34 beauty queens from 34 different countries of the World to open the fashion week.,” said Dr. Sandeep Marwah.

“We have grown in 3 years and it is going to be an interesting and valuable event to the industry,” added Ritu Lal Festival Director.

NiveditaSahni who is a psychologist was invited who shared views on mental problems faced by students and told how to overcome it . Mental illness can seriously affect a child’s ability to reach his or her potential. … Teachers can be the first to notice signs and symptoms of mental illness in their students. They can also help prevent mental illnesses from developing in the first place, through preventive measures in the classroom.- said NiveditaSahni

Another guest was PallaviPrakah who is motivational speaker who motivated students with her words “Students who are not motivated will not learn effectively. They won’t retain information, they won’t participate and some of them may even become disruptive. A student may be unmotivated for a variety of reasons: They may feel that they have no interest in the subject, find the teacher’s methods un-engaging or be distracted by external forces. It may even come to light that a student who appeared unmotivated actually has difficulty learning and is need of special attention.” -said msPallavi.

Seminar on Careers in fashion

Tue May 7 , 2019
On the third and final day of the 3rd Global Fashion and Design Week a seminar was conducted on ‘Careers in Fashion’ by Nitin Sood and Sana. Nitin and Sana are well known designers of Fashion Industry and have their own online Company named as “Happy Shappy”. Happy Shappy is […] 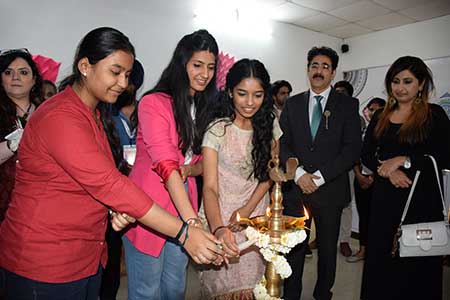