Noida: H.E. Mohamed Maliki Ambassador of Morocco to India has been honored with the Patron of newly formed Indo Morocco Film And Cultural Forum during the 3rd Global Fashion And Design Week Noida 2019 in a grand function.

“International Chamber of Media And Entertainment Industry has formed its new committee under the name and banner of Indo Morocco Film And Cultural Forum and H. E. Mohamed Maliki Ambassador of Morocco is now Patron to the organization,” said Dr. Sandeep Marwah President of the Chamber.

“It is a great pleasure and honor to be associated with international organization like ICMEI who all thought to create first ever Indo Morocco organization to promote art and culture on international level. I congratulate all the members of ICMEI for this gesture,” said Mohamed Maliki Ambassador to India.

Mohamed Maliki is graduate in literature and trained in Strategic Studies and Diplomatic Studies in Morocco, Pakistan, Malaysia and the United States. Ambassador Maliki has over two decades experience.

He started his career as a First Secretary of Foreign Affairs in charge of Technical Cooperation with African countries, he has wide experience in African and Asian affairs having served in Cameroon from 1994 to 2000 and at the Directorate of Asia and Oceania Affairs, Ministry of Foreign Affairs and Cooperation of Morocco till his appointment as ambassador to India. From July 2003 to August 2007, he had been the Deputy Ambassador at the Moroccan Embassy in Islamabad, Pakistan.

Sat May 4 , 2019
Noida: Moroccan Ambassador to India Mohamed Maliki nominated Dr. Sandeep Marwah President of Marwah Studios as the Chair of newly formed Indo Morocco Film And Cultural Forum during the 3rd Global Fashion And Design Week Noida 2019 at a function supported by ICMEI. “We are going to built further our strong […] 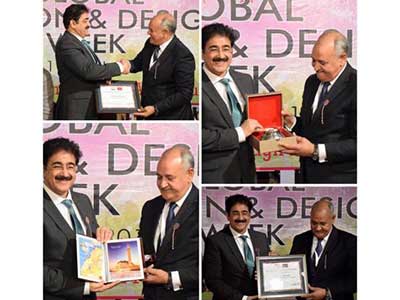