New Delhi: ICMEI- International Chamber of Media And Entertainment Industry handed over the prestigious scholarship of AAFT- Asian Academy of Film And Television to the Embassy of Armenia   in India for the deserving student from Armenia.

A scholarship of short-term course in cinema of the most popular institution of India AAFT was handed over to the H.E. Armen Martirosyan Ambassador of Armenia to India by Dr. Sandeep Marwah President of ICMEI as part of MOU signed between the two countries.

“The scholarship includes a short term course fee along with the boarding and lodging charges for three months for the student from Armenia,” informed Rajiv Mathur Director ICMEI.

“We are happy to hand over the first scholarship to the deserving student from Armenia to study in India in any discipline of film or television at AAFT, Noida, I am sure this will add on to the better relation between two countries,” said Dr. Sandeep Marwah presenting the scholarship to Ambassador.

AAFT is one of the best Media institutes in the World with five World records     to its credits. The institution has completed 26 years and churned out 15000 media professionals from 120 countries of the World.

“I appreciate this beautiful gesture by ICMEI and AAFT and hope we will work further to strengthen our ties,” added Armen Martirosyan Ambassador of Armenia to India. 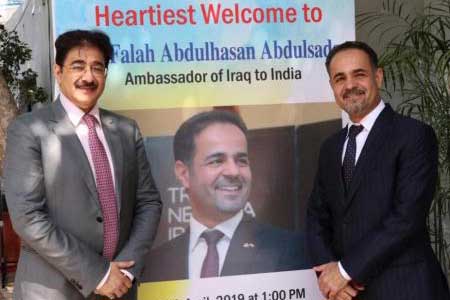