“Indian culture and traditions are so strong that they can never vanished from this earth even though we are influenced badly by the western countries. People like Dr. Harshvardhan and Virendra Sharma can live upto any expectations of the people of this country as they are culturally very strong,” said Dr, Sandeep Marwah Chancellor of AAFT University of Media And Arts while releasing the book on astrology.

“India has been advanced not only in current science projects, space craft, medicine, computer applications and information technology but it has given spiritual science also to the World. The art of knowing future, the World has learned from India. We were well aware of this science and Pandit Sharma has added another feather in the cap today,” said Dr, Harshvardhan Union Minister at Ministry of Science & Technology, Ministry of Environment, Forest and Climate Change and Ministry of Earth Sciences, Government of India.

New edition of The Bollywood Faces magazine published by Harsh Anand and Sucheta Anand was also launched from the same platform. Pandit Virendra Sharma paid his gratitude to the guests and presented the copy of the book to the dignitaries.

National Day of Senegal Celebrated by ISFCF at AAFT

Fri Apr 5 , 2019
Noida: Indo Senegal Film And Cultural Forum of International Chamber of Media And Entertainment Industry celebrated the National Day of Republic of Senegal at the campus of Asian Academy of Film And Television to high light their relation with the country of Senegal. “I extend my heartiest congratulations to H.E. […] 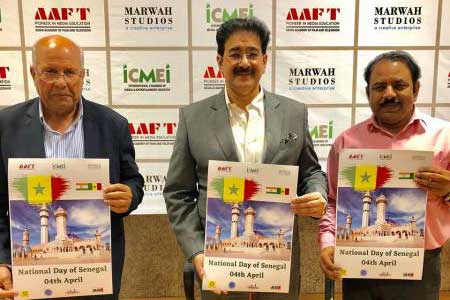