Noida: International Chamber of Media And Entertainment Industry in association with Embassy of Armenia launched the first ever Film and Cultural forum in India to develop and promote the relation between the two countries through art and culture in a grand function at Marwah Studios, Film City Noida.

“We are charged with new energy on the launching of new forum IAFCF-Indo Armenia Film And Cultural Forum at ICMEI to work together with the embassy of Armenia for the betterment of relation between two countries,” said Dr. Sandeep Marwah president of ICMEI.

“We have full trust in the working of ICMEI as the chamber has already proved its credential in many fields. We are sure we will be able to do more together in developing art and culture of both the countries,” said H.E. Armen Martirosyan Ambassador of Armenia to India.

Dr. Sandeep Marwah handed over the copy of project on country of Armenia, earlier prepared by the student of AAFT University of Media And Arts, during the event. Ambassador presented book on Armenia to Dr. Marwah for the University library. Sandeep Marwah also presented
his two books on accolades and accomplishments.

A poster was launched to mark respect to the decision stating Launching of Indo Armenia Film And Cultural Forum. It was decided that MOU between Chamber and Embassy of Armenia would be signed in due course of time.

Sat Mar 30 , 2019
Noida: Three days festival of Films from Bosnia And Herzegovina was inaugurated today at Marwah Studios at Noida Film City with great pomp and show. “Under Indo Bosnian Film And Cultural Forum It was decided at International Chamber of Media And Entertainment Industry to have a festival of films in […] 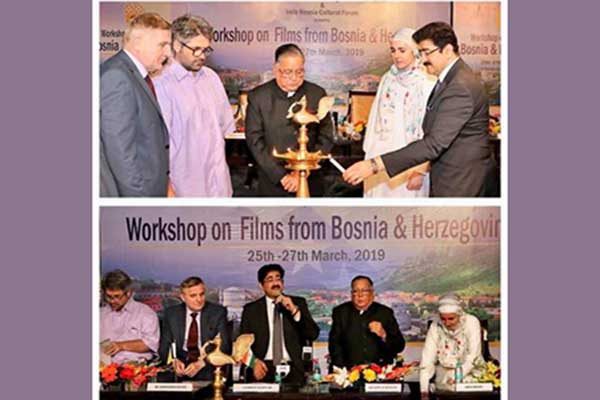