New Delhi: A new book of a well known journalist and writer KumKum Chadha was released recently at India International Centre in the presence of who’s who of Delhi-The Capital City of Events.

“It was a great pleasure to be present on such an important event where writer of the book is the hero of the day. It gives me enough confidence to promote the course in script and screen play writing at AAFT,” said Dr. Sandeep Marwah President of Asian Education Group while personally collecting the copy from the writer.

Born in Delhi, Kumkum studied at Lady Shri Ram college from where she did her masters in English literature. After a short course in journalism she joined Hindustan Times Group where she continues to work. During the thirty odd years at Hindustan Times, Kumkum worked in different editorial positions including Editor National News. She is a popular blogger.

Kumkum has specialized in political reporting apart from reporting on crime and gender issues. She published her first book The Crucifixion: Interviews Where leaders nail themselves. This is a collection of her widely read interviews.

Crime reporting, on the other hand, drew her attention to the horrible conditions prevailing in Indian jails. This led to an in-depth study for her second book The Indian Jail: A contemporary document.

The third book The Ten Year File is a collection of some of Kumkum’s remarkable writings between1982 to1992. Here Kumkum mirrors the goings-on in Indian politics through in-depth stories and interviews with eminent leaders.

“I am humbled by the presence of all the important people I invited for the book release,” said KumKum Chadha.

Seminar on Yoga by Global Yog Alliance at Marwah Studios

Sat Mar 2 , 2019
Noida: A seminar to bring in importance of yoga to the media World was organized by Asian Academy of Film And Television in association with Yog Alliance and invited people from all over India and abroad. Yoga is a Sanskrit word derived from the Sanskrit root “yuj” which means to […] 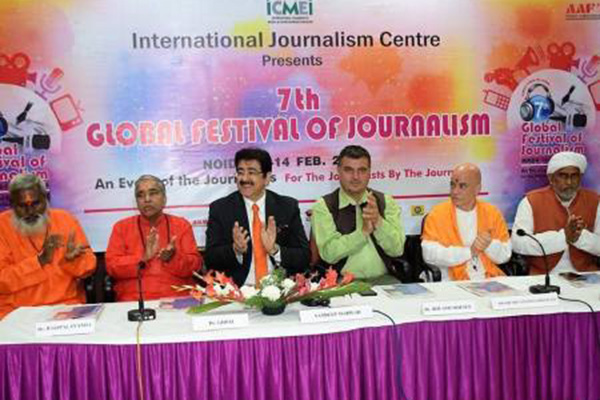