“We have the opportunity to work with the last Ambassador and we could organize a film festival, a tourism interaction, launch students club on Iceland etc. Now we are planning to add few more things to our association,” said Dr. Sandeep Marwah President of ICMEI.

A scholarship of short-term course at AAFT- Asian Academy of Film And Television was presented to H.E. Gudmundur Stefansson Ambassador of Iceland to India during the official visit to the delegation to Embassy of Iceland.

“The scholarship include the foreign registration charges, course fee, boarding, lodging for three months and production charges for the deserving student as recommended by the Ambassador,” added Dr. Sandeep Marwah while handing over the scholarship at Marwah Studios.

“It is a great honor to be part of the chamber and I thank on behalf of my Government for the offer extended to the student of Iceland to study in India. We will work together to bring our friendship to next level,” said H.E. Gudmundur Arni Stefansson Ambassador of Iceland to India. 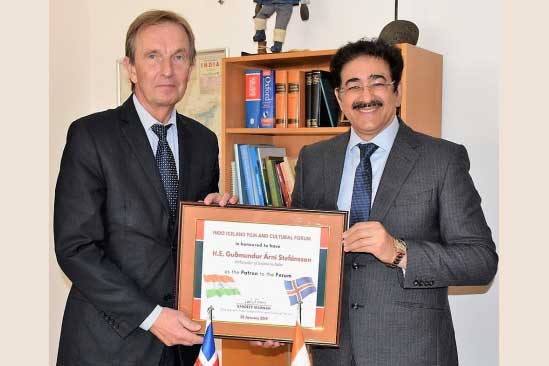