Noida: “We are thankful to K.L.Ganju to accept the Patronship of the first and newly constituted Indo Comoros Cultural Forum at International Chamber of Media And Entertainment Industry on this beautiful occasion of 12th International Festival of Cellphone Cinema at Noida Film City,” said Dr. Sandeep Marwah President of Marwah Studios.

“This is my first event after General body meeting of honorary consular corps Diplomatique – India (HCCD-I) which has elected me as the President of the corps for a term of three years. I am pleased to be the part of ICMEI and Patron to Indo Comoros Cultural Forum,” said H.E. K.L.Ganju while accepting the memento of Patronship in a grand function celebrated to inaugurate 12th International Festival of Cellphone Cinema.

He was sponsored by HCCD – I to represent Indian Consuls in World Federation of Consuls (FICAC). He was elected to the Board of Directors of the World Federation of Consuls (FICAC) in 2006 at Montego Bay (Jamaica) with 2nd highest Number of votes. He was re-elected to the Board of Directors in 2009 at Izmir (Turkey) and at MONACO in 2012,

Fri Jan 25 , 2019
Noida: Dr. Sandeep Marwah is an educator, philanthropist, social worker, filmmaker and President of Marwah Studios. Recently, he was honored by H.E. Muhamed Cengic the Ambassador of Bosnia And Herzegovina to India for his untiring contribution to the promotion of Indo Bosnia relations through arts and culture. “We have decided […] 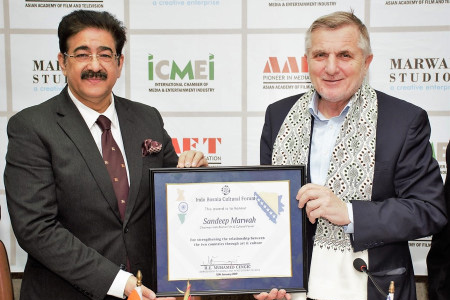