New Delhi: The federation of Footvolley has requested the renowned media person and World Record Holder in Sports Sandeep Marwah to be the National Patron of the organization.

“It is my honor and great privilege to get associated with Footvolley which is an international sports and growing in India very fast. I would love to promote this game in India,” said Sandeep Marwah President of Asian Education Group

Ram Avtar National President of the federation and Mukesh Sharma President of State of Delhi handed over the letter of patron ship to Sandeep Marwah in his     office in film city Noida.

The sports Footvolley was created by Octavio de Moraes in 1965 in Brazil. Footvolley combines field rules that are based on those of beach volleyball with ball-touch rules taken from association football. Essentially footvolley is beach volleyball except players are not allowed to use their hands and a football replaces the volleyball.

Mon Nov 12 , 2018
Noida: The great musician and activist Prince Ali visited Marwah Studios at Noida Film City to join hands with World Peace Development And Research Foundation of AAFT for spreading the word of Peace. Prince Ali entered the US market in 2008 with his unique rhythms and vocal range. This twice-platinum […] 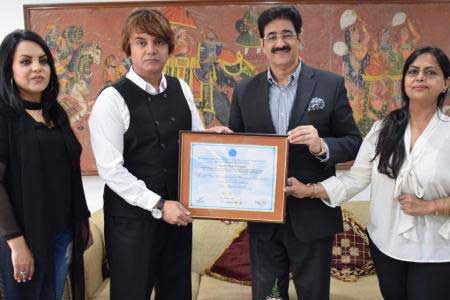