New Delhi: NRI Achievers organized an International event Indian Achievers Sammaan and Business Conclave at Hotel Shangrila at New Delhi where Sandeep Marwah was honored for his contribution to media and entertainment industry.

“The Indian Achievers Samman 2018 felicitate the achievements of exceptional role models from diverse fields who have succeeded against mighty odds. These pioneers have broken the glass ceiling for the new generation by setting an example with their hard work, perseverance and innovation. We feel proud to recognize and honor such empowered achievers contributing in the making of the nation,” said Rajeev Gupta Managing Director and Editor of NRI Achievers.

Sandeep Marwah has been the founder of Noida Film City, Marwah Studios the first professional studios of North India, Asian Academy of Film And Television the first private film school of India and created six world records in media.

He has been the creator of more than 100 film, TV, media, art and culture organizations. He is also the founder president of International Chamber of Media And Entertainment Industry, the first of its kind in the World. 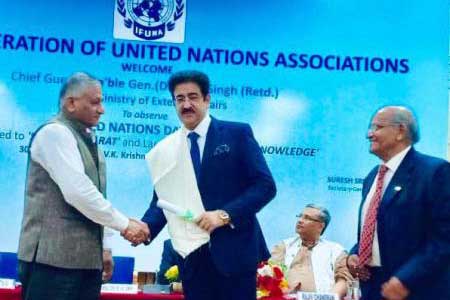