Noida: The whole campus of Marwah Studios was bubbling with energy as the Team of forth coming film Namaste England entered the complex.

“We are here for film promotion of our new film Namaste England to be released on 18th of October all over India. We are overwhelmed by the welcome and reception here at my Alma Mater. It is a very pleasing experience to be here,” said Arjun Kapoor the lead star in the film.

“This is my first visit to Marwah Studios and I have come to know a lot about its activities. Film education is must today,” said Parineeti Chopra the lead star of the film.

“We are so excited to receive two big stars today at AAFT. Arjun and Parineeti have done extra ordinary well in the industry. We wish them a great success for the new film,” said Sandeep Marwah President of Marwah Studios.

Now We Are Part of United Nations- Sandeep Marwah

Sat Nov 3 , 2018
New Delhi: Dr. Sandeep Marwah President of Marwah Studios and Asian Education Group thanked United Nations for giving ample opportunity to serve the society in different segments on many occasions. “We are happy to be part of United Nations and always ready to be part of their team in every […] 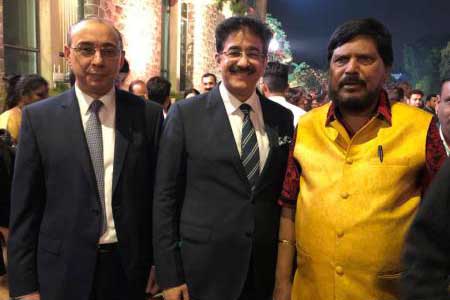