Nicosia: The first ever Cyprus Film Summit 2018 was held at Filoxenia Conference Center in Nicosia on October 10, 2018. “The Summit was organized by the Cyprus Investment Promotion Agency (Invest Cyprus), the Cyprus Tourism Organization and the Press and Information Office of the Republic of Cyprus,” informed Michalis P. Michael Chairperson of Cyprus Investment

The First Cyprus Film Summit is attended by International Film and Audiovisual professionals from film and audiovisual industry from all over the world, representing a unique opportunity for Cyprus to showcase its compelling advantages as a filming destination,” said Sandeep Marwah a well-known filmmaker from India.

In addition to attracting film and other audiovisual productions, the aim of the conference was also to present the Cyprus Film Scheme recently introduced by the Cyprus Government, providing financial incentives for all domestic and international productions filmed in Cyprus, as well as to present the Film in Cyprus online platform, from where interested parties will be able to receive relevant information on all developments in the audiovisual industry in the island and submit their application online.

“Over 120 participants from production companies, as well as Executive Producers from Europe, India, Russia and North America were there at the Summit. It is a good beginning to establish a powerful film industry,” added Marwah.

Mon Oct 15 , 2018
Nicosia: A well known name in the media and entertainment industry and president of International Chamber of Media And Entertainment Industry Sandeep Marwah met H.E. Demetrios Theophylectou the former Ambassador of Cyprus to India. “It is during his time a very powerful organization under the name and banner of Indo […] 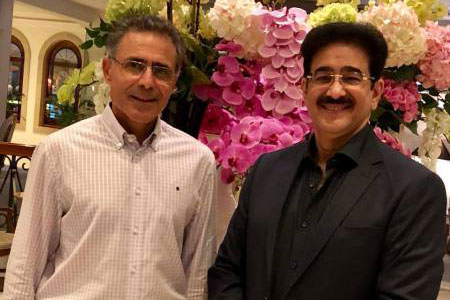