Noida: A two member delegation representing the popular colleges of Geneva Switzerland were here at Noida Film City to meet and greet the faculty of Asian Academy of Film And Television to have better relation between two institutions.

“We are keen in joining hands with AAFT and would love to have an exchange program. We are impressed by the quality of education and the infrastructure of training,” said Markus Luedin Principal of Kantonsschule Menzingen Switzerland accompanied with Christol Konig Beatty From Department of Physics and Maths.

“We have deep interest that our student must fly to Switzerland for better exposure and let them see the most beautiful part of the world,” said Sandeep Marwah President of AAFT.

Later Amit Kumar Dean AAFT School of Performing Arts explained them about the courses and the activities of the institution.

Fri Oct 12 , 2018
Nicosia: A welcome dinner was organized by the Government of Cyprus in honor of foreign delegates from different parts of the World to attend the first Cyprus Cinema Summit at Nicosia. “We are gathered here to bring in new energy to Cyprus Film Industry. Your cooperation and support will help […] 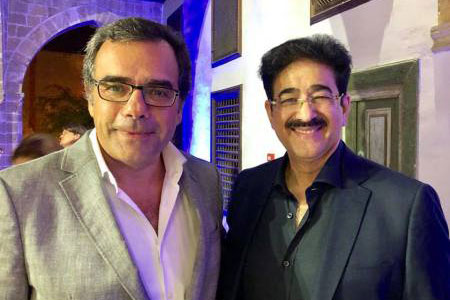