Noida: WE are here to share our experience in film industry. What all we had to go through must be told to make you a perfect film maker. Rome was never built in a day. You have to be street smart to be successful,” said Vindu Dara Singh while narrating his stories to the young film makers of Asian School of Media Studies at Noida Film City.

Education and training is the right way to get into film and television industry. There is no difference between left between the two mediums. You have to learn the best from the given situation and here from your teachers,” he added while answering the questions of the film students.

Vindu made his acting debut in the 1994 Hindi film Karan. Then he acted in 1996 Punjabi film, Rab Dian Rakhan as a hero followed by Mitter Pare Nu Hall Mureedan Da Kehna, and in Jatt James Bond, with Gippy Grewal and Lion Of Punjab, with Daljit Dosanjh. Since then, he has acted in many films, mostly in supporting roles.

“I am thankful to Vindu for   motivating the students of Asian Education Group. There is nothing bigger than experience,” said Sandeep Marwah Thanking   Vindu for his efforts.

Wed Oct 3 , 2018
Noida: A well known film television and media person Sandeep Marwah was honored with Dada Sahib Phalke Film Festival Award in a grand function at Noida. The award was presented to Sandeep Marwah by Satpal Ji Maharaj the tourism Minister of Uttrakhand who appreciated the works of Sandeep Marwah and […] 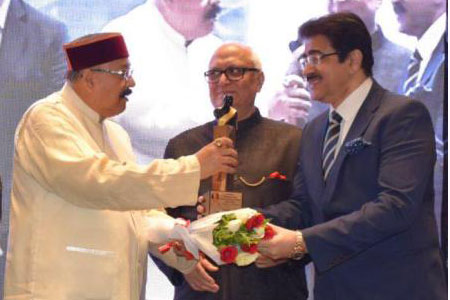