Noida: The Patron of Boxing Federation and World Record holder in sports Sandeep Marwah once again honored for his deep interest in Boxing and promotion of the game.

Amjad Khan of Amjad Boxing Foundation honored Sandeep Marwah for supporting the cause of Boxing, which is now flourishing in India. After two major programs at Marwah Studios another program was recently conducted in Kolkata and brought Boxing to new level.

“We are supporting the game of Boxing and a club has been created within Marwah Studios for the students of Asian Education Group to learn and master the game,” said Sandeep Marwah. “Continuous practice will create some champions one day,” added Marwah.

Mon Oct 1 , 2018
Noida: The management of AAFT organized a powerful workshop by a well-known film director Rahul Rawail for the students of school of Cinema at Marwah Studios at Noida Film City. “AAFT has a big name now and it has attracted me to be here to share my experiences with young […] 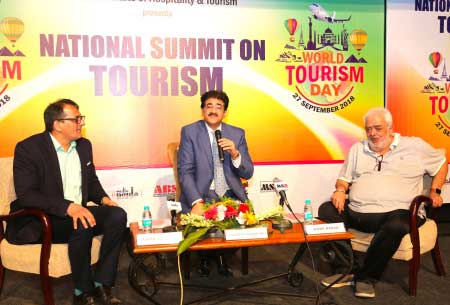