Noida: The star cast of Feature film Mantoo including Nawasuddin Sidiqui and Rasika Duggle along with the director Nandita Dass visited Marwah Studios who were there to interact with the media students of Asian Academy of Film And Television.

“Nandita Dass is an actor and director, one of the leading figures in the Indian film industry. She has acted in more than 40 feature films in ten different languages. Das has been acclaimed for numerous performances, including in Fire, Earth, Bawandar , Kannathil Muthamittal, Azhagi, Kamli, and Before The Rains. Her directorial debut was with Firaaq, which premiered at the Toronto Film Festival, traveled to more than 50 festivals, and won more than 20 awards,” introduced Sandeep Marwah President of Marwah Studios.

Nawasuddin Sidiqui made his Bollywood debut in 1999, with a small role in the Aamir Khan starrer Sarfarosh He then appeared in Ram Gopal Varma’s Shool, Jungle and Rajkumar Hirani’s Munnabhai MBBS. He is known for his roles in Mom, Manjhi-The Mountain Man, Bajranghi Bhaijan etc, who spoke about his film Manto.

Rasika Dugal is an Indian actress who starred in several Bollywood movies, an Indian-German drama film and several Indian soap operas. She is best known for her role in the movies Kshay, Qissa and Manto also replied to questions putup by students.

Every one spoke about the film and shared their experience. Later Sandeep Marwah honored all the three stars with Life Membership of International Film And Television Club of AAFT. 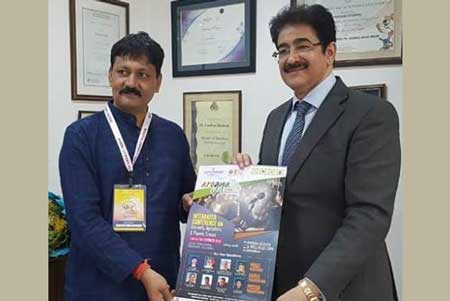