Noida: The Federative Republic of Brazil and Republic of India through Embassy of Brazil and International Chamber of Media And Entertainment Industry will work together for the promotions of Arts and culture to develop and promote relations between two countries.

“The visit of H.E. Tovar Da Silva Nunes Ambassador of Brazil to India to the international headquarters of ICMEI has brought new energy to the relation between two countries India and Brazil. We will soon give a formal shape to this relationship,” said Sandeep Marwah President ICMEI.

“I am impressed by the activities of ICMEI, its better to be late than never. Soon we will start creative activities with ICMEI after formally launching Indio Brazil Film And Cultural Forum,” said H.E. Tovar Da Silva Nunes Ambassador of Brazil to India.

Sat Sep 22 , 2018
New Delhi: An exhibition and sale of artworks inaugurated at the National Gallery of Modern Art (NGMA) in a step forward by the Indian art fraternity to raise funds for flood-ravaged Kerala. Titled “Art for Kerala Flood Disaster 2018”, the 3-day exhibition and sale will see artworks by leading modern […] 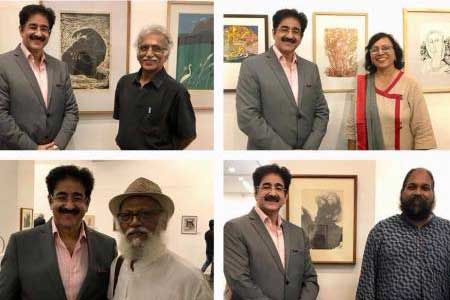