New Delhi: At the 2nd edition of Indian Global Star Awards mementos were presented to the people who all have contributed to the society in their respective fields. A glittering function was organized at Hotel Le Meridien, New Delhi.

“Sandeep Marwah the recipient of Dada Sahib Phalke Film Foundation Award, is five times World Record Holder. He is the founder of Noida Film City, Marwah Studios and Asian Academy of Film And Television. Marwah has been teacher to 13000 media profession, producer of 2300 short films, and his reach is now in 145 countries of the World through his contribution to art and culture,” citation read by the anchor to invite Marwah for the award.

“I am thankful to the organizers for their appreciation and encouragement. Every award motivates you to do better than before. I am charged with new energy to do better next time,” said Sandeep Marwah.

Tue Sep 4 , 2018
Noida: Asian Academy of Film And Television in association with International Chamber of Media And Entertainment Industry will work with Embassy of Brazil to promote art and culture of both the countries. “We are very keen in working together with AAFT & ICMEI. A lot can be planned together to […] 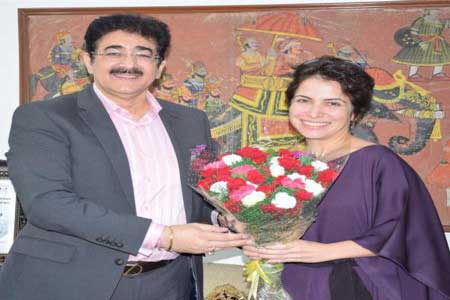