Noida: International Chamber of Media And Entertainment Industry through its President Sandeep Marwah greets the people of Kyrgyzstan on their National Day that falls on 31st August.

“I on behalf of Media And Entertainment Industry of India congratulate the people of Kyrgyzstan on the National Day and wish both countries a very strong relationship for all time to come,” said Sandeep Marwah.

An Agreement on Cooperation in the spheres of culture, was recently signed during the visit of Prime Minister Narendra Modi in July 2015 to replace the agreement on Culture, arts, education, science, mass-media and sports of 18 March 1992. In general, there is appreciation of Indian culture.

The Centre for Indian Studies set up in Osh State University in 1997 has been useful in providing an exposure to Indian culture and civilization to academicians and intelligentsia in this country.

About 3500 Indian students are studying medicine in various medical institutions in Kyrgyzstan. A few businessmen are engaged in trade and services in Kyrgyzstan.

Tue Sep 4 , 2018
New Delhi: A musical evening by renowned Ghazal singer Sakheel Ahmed organized by Urdu Ghar and curated by Dr. Mridula Tandon at New Delhi was a great success. “Life is dull, boring and would have been like a mistake without music. Music makes you spiritual, full of zest and enthusiasm […] 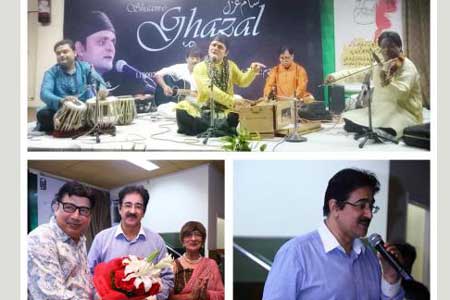