Noida: The management planned a detailed interaction of the media students of AAFT with the complete film unit of feature film Karim Mohammed at Marwah Studios.

“Your dedication must be reflected with your day to day affairs. It is a business of expression. This is one business where you grow every day and you learn every day. Every director has some special qualities which helps actor to grow in his performance,” said Yashpal Sharma a well know actor in lead popular for his films like Gangs of Wassayepur, Sing Is King, Arjun Pandit, Pukar and many others.

“Every film maker is an asset to film training. Their experience is like a course book which he narrates in few minutes of his interaction,” said Sandeep Marwah President Asian Education Group.

Later Sandeep Marwah honored the members of the unit with life membership of World Peace Development And Research Foundation of Marwah Studios.

The film is directed by Pawan Sharma, written by Jitendra Gupta, produced by Rajinder Singh Rajawat, music by Balkrishan Sharma, Cinematography by Subhransu and film edited by Prakash Jha,

Mon Aug 27 , 2018
World Peace Foundation Join Hands With Brahma Kumaris Noida: World Peace Development And Research Foundation created by Jagat Guru Sandeep Marwah to promote all those activities in the World which brings love, peace and unity to the people of this planet. The foundation has created 196 International Committees and 37 […] 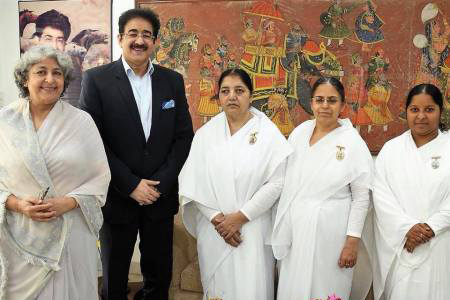