Noida: A well-known peacemaker Sasikumar was honored with life membership of World Peace Development And Research Foundation at the international headquarters of the foundation at Noida Film City.

Sasikumar is the Ambassador of Parliament of The World’s Religion USA and deeply and silently involved with interfaith and the peace activities in India and abroad.

Sasikumar is also the senior member of Santhigiri Ashram which is located in Pothencode, Thiruvananthapuram District, Kerala. The ashram was founded by Navajyothisree Karunakara Guru and is recognized as a Social and Scientific Research Organization by the Government of India.

Mon Aug 27 , 2018
New Delhi: The President of Asian Education Group Sandeep Marwah seek the audience of   the former President of Republic of India Shri Pranab Mukherjee to invite him to the new campus of Asian Business School at Noida. “We have completed 25 years in Education and created five World Records in […] 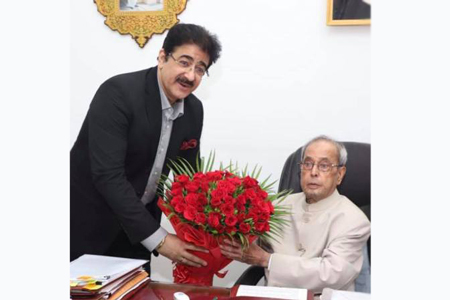