Kolkata: A well-known international media personality, Sandeep Marwah President of Marwah Studios was honored at the national summit on digital media under the title ENGAGE 2018 at Hotel ITC Sonar at Kolkata.

ENGAGE 2018 is Eastern India’s largest digital media conference designed by Public Relations Society of India Kolkata Chapter and is associated with some of the brightest industry stalwarts as its members.

Sandeep Marwah is the founder of Film City Noida, the fastest growing film city in the World. He is founder of Marwah Studios the first professional film studios of North India. He is also the founder of first private film school of the country.

“Sandeep Marwah has been the real cultural ambassador of India. His contribution to films, television, media, tourism, education and especially Public Relations is par excellence. Sandeep Marwah is chairing around 100 organizations and developed a wonderful relations al over India and most of the countries of the World. He deserves much more than a PRSI Award,” said Soumyajit Mahapatra, Secretary, Public Relations Society of India.

“I am so thankful to PRSI for honoring me here and giving me this wonderful opportunity to be with who’s who of Kolkata and the Eastern India. I am carrying beautiful memories from Kolkata,’ thanked Sandeep Marwah while receiving the award.

Mon Aug 27 , 2018
Noida: A well-known peacemaker Sasikumar was honored with life membership of World Peace Development And Research Foundation at the international headquarters of the foundation at Noida Film City. Sasikumar is the Ambassador of Parliament of The World’s Religion USA and deeply and silently involved with interfaith and the peace activities […] 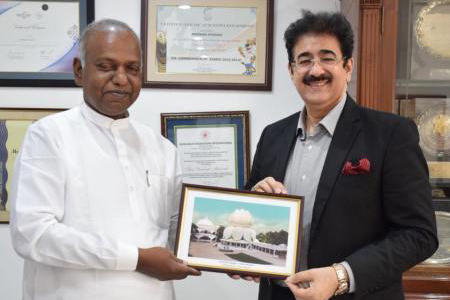