Noida: “There are an estimated 370 million indigenous people in the world, living across 90 countries. They make up less than 5 per cent of the world’s population, but account for 15 per cent of the poorest. They speak an overwhelming majority of the world’s estimated 7,000 languages and represent 5,000 different cultures,” said Sandeep Marwah President Marwah Studios at International Day of World’s Indigenous People at Marwah Studios.

Indigenous peoples are inheritors and practitioners of unique cultures and ways of relating to people and the environment. They have retained social, cultural, economic and political characteristics that are distinct from those of the dominant societies in which they live.

Indigenous peoples today, are arguably among the most disadvantaged and vulnerable groups of people in the world. The international community now recognizes that special measures are required to protect their rights and maintain their distinct cultures and way of life. The day is observed on 9th August.

Mon Aug 27 , 2018
Noida: The management planned a detailed interaction of the media students of AAFT with the complete film unit of feature film Karim Mohammed at Marwah Studios. “Your dedication must be reflected with your day to day affairs. It is a business of expression. This is one business where you grow […] 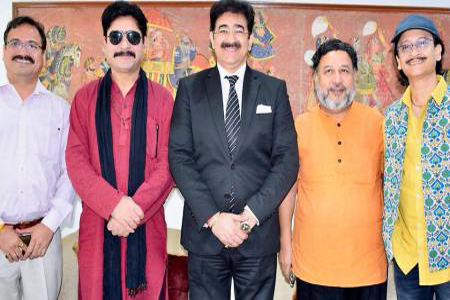