“We have framed Indo German Film And Cultural Forum here at Munich under International Chamber of Media And Entertainment Industry to develop and promote relation between two countries and have been blessed by the Minister President to whom we have also briefed about our activities,” said Sandeep Marwah to H.E. Sughand Rajaram Consul General of India at Consul General during his visit to Germany.

“The office of Consul General will support you in fulfilling the purpose of the forum and will also guide you as how to proceed further. We congratulate you for the award received in Bavarian Parliament Munich and for the efforts in building better relations,” said H.E. Sughand Rajaram Consul General welcoming Marwah at office.

IGFCF has announced the scholarship for the deserving student to study cinema in India, a joint venture of short film, a film festival of German films in India and Festival of Indian Films in Germany, proposal to shoot Indian films in Germany and vice versa, promotion of tourism activities including visit of Indian delegation to Munich are some of the initial activities planned in forum informed Sandeep Marwah.

A well-known businessman and social worker Hannes Schurger has been nominated as Chair for Germany and Dr. Deepak Narwal from UK is supporting the cause. Later Consul Sanjay Kumar Mehta presented a book on women empowerment to all the members of the delegation.

Wed Jul 11 , 2018
Noida: A full team of new feature film Teri Bhabhi Hai Pagle visited Marwah Studios to interact with the students of AAFT- Asian Academy of Film And Television at Noida Film city. “We are pleased to welcome the starts of TBHP who all are in real good mood to do […] 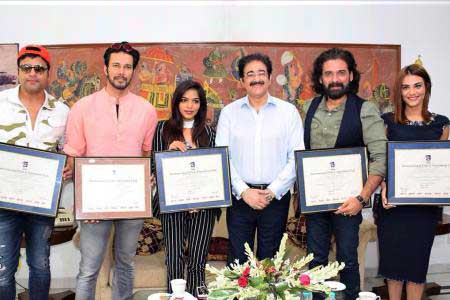