New York: The visit of President of Marwah Studios Sandeep Marwah to New York brought many valid points related to Art & Culture, Tourism, Fashion and Education, on the table.

“We have realized that at AAFT, Marwah Studios and ICMEI, We are on the right track of uniting the World through art and culture, education, tourism & fashion The love, peace, and unity can be brought by either   generating huge business between the two countries or by way of art and culture,” said Sandeep Marwah giving his views to the press at Hotel Baccarat at Fifth Avenue, New York.

Sandeep Marwah also briefed the press about World Peace Development And Research Foundation, which is now working in 145 countries of the World. The motive of the organization still remains the same of uniting the World.

A hand book consisting of 100 international awards and accolades received by Marwah and another book which speaks about 100 organizations Marwah has created to support the society through different segments were handed over to the press.

NFTC Will Have Its Representative In Munich

Tue Jul 3 , 2018
Munich: The Managing Director of National Federation of Tourism And Transport Cooperatives of India Limited, one of the most important 17 federations of India under National Cooperative Movement visited Munich, the state of Bavaria in Germany to look into the new technology. Sandeep Marwah visited the two technical institutions attached […] 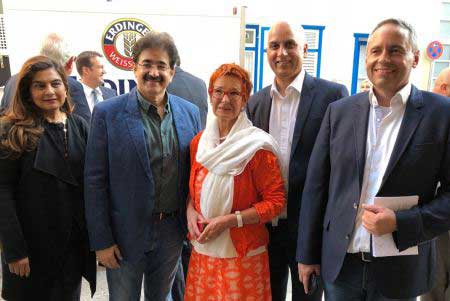