Noida: A powerful delegation of the filmmakers from Ghana arrived at ICMEI-International Chamber of Media And Entertainment Industry to join hands with the chamber to promote film activities in Ghana.

[FDGG] and Daniel Fiifi Jayden Communications Director [FDGG] were there at Marwah Studios to discuss and plan the activities of Indo Ghana Film And Cultural Forum in the next few months.

“Indo Ghana has gone far ahead in devolving the relations between the two countries through art and culture. Today a very important event of World Environment Day is also inaugurated along with the Indo Ghana Summit, which speaks of our relation with Ghana. I welcome the film delegation to AAFT,” said Sandeep Marwah President ICMEI.

“We are amazed to receive such a grand reception at Marwah Studios, this speaks that Sandeep Marwah is a great showman of Indian Film Industry. His international status is beyond comparison. We wish to have a very strong bonding with ICMEI, Marwah Group and Indian Film Industry,” said Richard Yaw Boateng.

“The relations between Ghana and India are growing day by day since we have created Indo Ghana Film And Cultural Forum. I am sure we will be able to do wonders in the next few months. ICMEI activities are par excellence,” said H.E. Mr. Michael Aaron N.N. Oquaye Jnr., High Commissioner of Ghana to India while opening the Indo Ghana Session at AAFT.

The delegation took the tour of the Film School AAFT- Asian Academy of Film And Television, met a group of filmmakers and television producers,had interaction with the media students after the summit.

Radio Noida, MSTV and other national press covered the event. A grand dinner was also planned in the honor of the delegation. A scholarship for a short-term course in Production Direction at AAFT was also presented to the members of delegation.

Lamhe- Farewell to Students of ASMS School of Cinema

Wed Jun 20 , 2018
Noida: ASMS- Asian School of Media Studies planned a farewell get-together for the students of 2016-18 Batch of masters in Cinema and 2015-18 Undergraduate Batch in Cinema at Marwah Studios. “We are proud of our students. Not only they have educate and trained themselves for the film and television industry […] 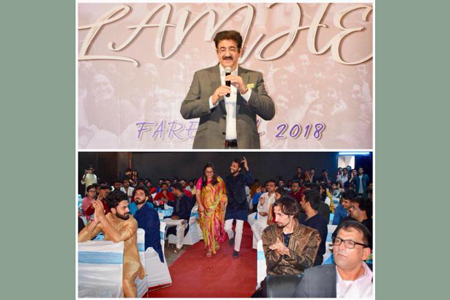