Noida: International personality and an educationist Dr. Sandeep Marwah has been nominated as the Chairperson of newly constituted body by the Embassy of Vietnam in India under the name and banner of Indo Vietnam Film And Cultural Forum to promote and develop relations between two countries in a big way.

“We are proud of Sandeep Marwah who has such a powerful past performance. His expertize in Cultural Diplomacy has convinced and influenced us that he is the right person to be the showman of this forum,” said H.E.Ton Sinh Thanh Ambassador of Vietnam to India while honoring Marwah with the plaque of appointment of honorary chair of IVFCF.

“I am thankful of the confidence His Excellency has shown in me to take the relations of India and Vietnam to the next platform. I am ready and charged with new energy to work for this cause and will leave no stone unturned to fulfill the desires and demands of both the countries,” said Sandeep Marwah now Chair of IVFCF.

Sandeep Marwah is six times World Record Holder in films, television, Media, art and culture. He is the recipient of more than 500 hundred accolades and appreciations from all over the World.

Mon Jun 18 , 2018
Noida: Like every year, this year also Marwah Studios in association with International Chamber of Media And Entertainment Industry and Asian Academy of Film And Television celebrated World Environment Day at Noida Film City. “We have tried our best to bring awareness of all those programs which United Nations has […] 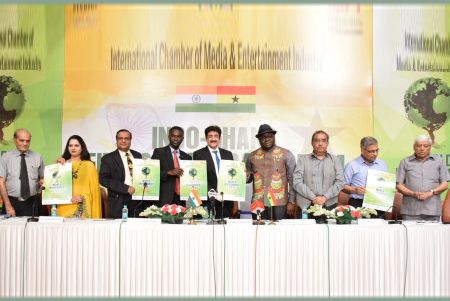