“The boxing club of AAFT has begin its activities by organizing another major event by inviting professionals and giving young aspirants an opportunity to learn from heir style and way of conducting,” said Sandeep Marwah President of Marwah Studios.

“We need to have more games like this. The fact is that any sports will bring good health to the nation.     Healthy Citizens means Healthy Nation,” said Manoj Tewari MP and Delhi Pradesh President of BJP while lighting the ceremonial lamp.

“Marwah Studios is pioneer in supporting any good work, be it a charity, media activities, film event or sports. By joining hands Marwah Studios   has encourage another national sports which has been ignored for a long time,” said S.M. Khan former Director General Ministry of Information And Broadcasting, Government of India.

“ The sports bring in a lots of sportsmanship in students. The games are the need of the hour. It is essential for overall personality of the student. I congratulate Sandeep Marwah for adding sports to the college activities. This will bring major change in the thinking and   alertness of the students, said Stuti Kacker – IAS, Chairperson, National Commission for Protection of Child Rights.

Chandan Singh and Naseem Ahmed Professional Boxing Coach have groomed these professional players for fight event. The Best Boxers Award was given to Rakesh Lochav in the male category and to Jaspinder Kaur in the female category.

Amjad Khan an international player and founder of Amjad Khan Boxing Foundation thanked every one for their presence and being a part of the show. He also paid his gratitude to the World Boxing Champion and Olympic Medalist Amir Khan for motivating him to start this event.

AAFT Scholarship For Republic of Ghana

Wed Jun 20 , 2018
Noida: Indo Ghana Film And Cultural Forum of International Chamber of Media And Entertainment Industry announced and handed over the AAFT scholarship to the Film delegation from Ghana to India. “I am pleased to hand over the first scholarship of AAFT short term course of three months to   Richard Yaw […] 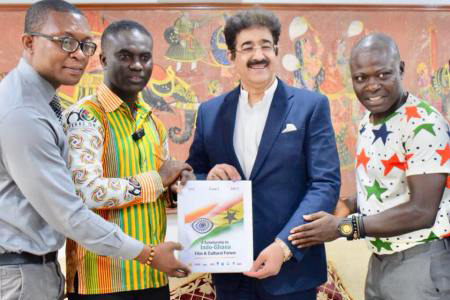