Noida: First time in the history of Indo Vietnam diplomatic relations a cultural forum has been jointly created by the Embassy of Vietnam in India and International Chamber of Media And Entertainment Industry at Marwah Studios, Noida Film City, the fastest growing film city of the World.

“History has been written in the books of Indian and Vietnam Relations when an organization has been formed to develop and promote relation between two countries through films, television, media, art and culture,” said Sandeep Marwah renowned art promoter and President of ICMEI.

“Today is a unique day for us, we have gone full-fledged Into the cultural diplomacy with India. I am sure we will be able to make our relations much stronger through the promotion of art and culture,” said H.E. Ambassador of Vietnam in India.

A poster was launched to mark the opening of the forum and respect to the culture, flags of two nations. H.E. nominated Sandeep Marwah a popular international personality from India as the Chairperson of the organization and in return Sandeep Marwah handed over the patron ship to the Ambassador of Vietnam.

Mon Jun 18 , 2018
Noida: “It is a great pleasure and honor to present the patron ship of newly formed Indo Vietnam Film And Cultural forum to H.E. Ton Sinh Thanh the Ambassador of Socialist Republic of Vietnam to India,” said Sandeep Marwah President of International Chamber of Media And Entertainment Industry in an […] 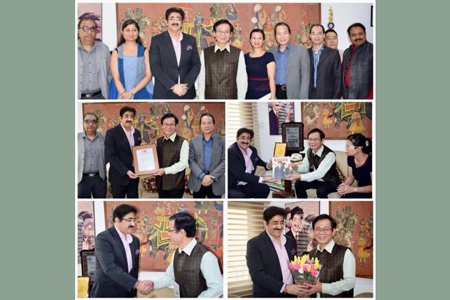