New Delhi: The High Commissioner of Kingdom of Lesotho H.E. Bothata Tsikoane has been presented with the Patron ship of Indo Lesotho Film And Cultural Forum on his visit to the International Head Quarters of ICMEI at Noida Film City.

The Indio Lesotho Film And Cultural Forum was created last year on the arrival of high-powered delegation from Kingdom of Lesotho at International Chamber of Media And Entertainment Industry at Noida Film City.

The delegation was comprising of 14 senior members of Government of Lesotho under the leadership of the Principal Secretary Office of the Prime Minister of Lesotho Ms Mataeli Makhele who all visited Marwah Studios to understand the media and entertainment industry of India on the recommendation of Ministry of External Affairs, Government of India.

“I am touched by the gesture of Sandeep Marwah, it was a pleasant surprise. We all together will make better relation between two countries,” said H.E. Bothat Tsikoane High Commissioner.

“We will be guided by the High Commissioner as how we have to proceed further in our action,” added Sandeep Marwah President of Marwah Studios. Earlier High Commissioner released the poster of ILFCF as a gesture of goodwill. He was accompanied with Makhatwe E. Mankimane First Secretary High Commission of Lesotho.

Mon Jun 18 , 2018
Noida: Macro Bretzmann, Juris Savickis and Hannes Schurger with the leader of the delegation Dr. Deepak Narwal Economic Senator of European Economic Senate visited the campus of AAFT to join hands with Marwah Studios for the promotion of art, culture and education. AAFT-Asian Academy of Film And Television in association […] 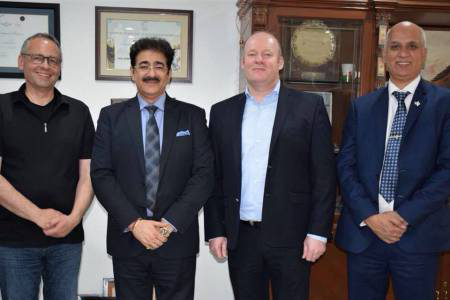