Renowned film and television personality Sandeep Marwah was honored with Raj Kapoor Award by the organizers for his untiring contribution to cinema in this part of the World.

“ What Sandeep Marwah has done for cinema no one has done that. His contribution will be remembered for all time to come. He has given not only film city Noida but 12000 cinema force to the nation,” said Dr. Rameshwar Kumar while inviting Marwah on the stage to light the ceremonial lamp.

Sat Jun 9 , 2018
Tashkent: Sandeep Marwah President Marwah Studios Presented the first scholarship of AAFT- Asian Academy of Film And Television for a short term course of three months to    H.E. Fukrat Zakirov the Minister of Cinema, Art and Culture during his visit to Ministry in Tashkent. “We are happy and pleased to […] 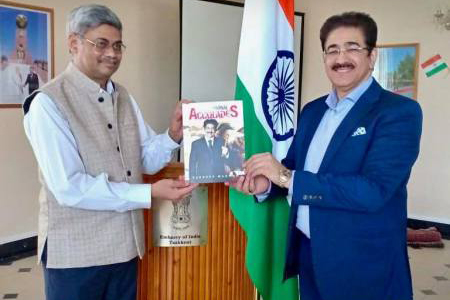