Tashkent: Sandeep Marwah President Marwah Studios Presented the first scholarship of AAFT- Asian Academy of Film And Television for a short term course of three months to    H.E. Fukrat Zakirov the Minister of Cinema, Art and Culture during his visit to Ministry in Tashkent.

“We are happy and pleased to hand over this scholarship to the deserving student from Uzbekistan to learn cinema at AAFT for a period of three months at Noida in India, The scholarship also includes the boarding and lodging for three months. We will be expecting the student to be the Ambassador of AAFT in Uzbekistan,” said Sandeep Marwah.

“We are excited to receive this scholarship and trust that student will learn a lot and will add to the growth of Cinema in Uzbekistan,” said Minister of Cinema Art and Culture.

Sandeep Marwah thanked Minister for organizing a high powered meeting at the     ministry and discussed many points in relations to growth of cinema, film festivals and cultural exchange between two countries.

AAFT is an International seat of learning and has been rated as the first ten best film schools of the World with six World Records to its credit in cinema and media studies.

Sandeep Marwah Invited by the Ministry of Culture of Uzbekistan

Sat Jun 9 , 2018
Tashkent: The Ministry of Cinema, Art and Culture organized a special high-powered meeting at the ministry for the popular Indian film personality Sandeep Marwah President of Marwah Studios and International Chamber of Media And Entertainment Industry on his visit to Tashkent in Uzbekistan. Sandeep Marwah lead 18 member delegation to […] 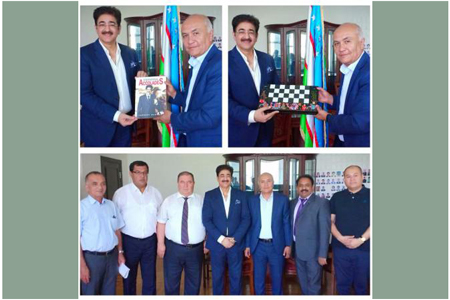