New Delhi: A full day food festival and seminar on the serious issues on tourism were designed by a group of organizations including Magika, ICMEI, NFTC, AAFT and many Indian and foreign Embassies in New Delhi.

The discussions and talks were followed by the award function and the organizers honored all those who have contributed to tourism. The most prestigious Tourism Promotion Award went to Sandeep Marwah President Marwah Studios for his untiring contribution to Tourism and Hospitality Industry.

Sandeep Marwah has created a word Film Tourism 25 years back and now it is the most important tourism in the World. His contribution as Managing Director of National Federation of Tourism And Transport Cooperatives of India Limited is par excellence.

His school AAFT has attracted two million people to Noida Film City and Asian Institute of Hospitality and Tourism through their degree and skill development program educating young talent cautiously for this industry.

“I am thrilled to accept my award for tourism. There is a very thin line between tourism and cinema. We have removed that line for the promotion of both the industry,” said Sandeep Marwah accepting the award.

The award was handed over in a impressive function at Hotel Pullman at Aero city in the presence of many High Commissioners & Ambassadors and giants from the industry.

ICMEI And GCTC Invited Delegates to Speak on World Peace 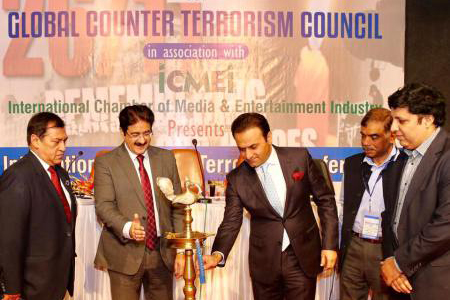