Kolkata: The Public Relations Society of India nominated Global Cultural Minister Sandeep Marwah as the Chair for the forth coming summit at Kolkata under the title Artificial Intelligence in the month of August, 2018.

We are getting prepared to bring the summit to international level as our chairperson of the summit has a very high standards. We are inviting best of the speakers and brains from all over India to be part of this Summit,” said Soumyajit Mahapatra President of the Organization.

“It will be great pleasure to be part of summit planned for August at Kolkata. It will be wonderful opportunity to meet who’s who of the industry and time to exchange thoughts. I congratulate the organization PRSI for putting efforts into the show,” said Sandeep Marwah thanking for nominating him for chair.

Sat Jun 2 , 2018
New Delhi: A three-day group shows of 51 artists from all over India and abroad inaugurated by the Global Cultural Minister Sandeep Marwah President of Marwah Studios at Indira Gandhi Centre for Arts, New Delhi. Some of the well renowned painters and sculpture were invited by 9th International Art Exhibition […] 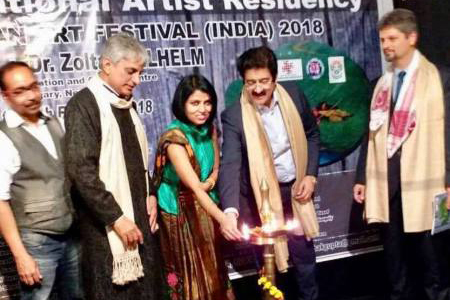