New Delhi: Fifteen-member delegation of the Andijan region of Uzbekistan reached Delhi to discuss business with the members of business and service community at New Delhi.

Sandeep Marwah Chairperson of Indo Uzbekistan Film And Cultural Forum was invited to speak to the delegates about the activities of the forum and his departure to Tashkent same day. The Ambassador of Uzbekistan to India H.E. Farhod Arziev was also present there.

“We have started working in the departments like Films, Television, Media, Arts and Culture, Fashion and Education with the government and private sector at Uzbekistan and hope that my visit will bring some concrete results at the end of the trip,” said Sandeep Marwah thanking Anil Khaitan and Saurab Sanyal of PHDCCI for inviting him.

Fri Jun 1 , 2018
Tashkent: The Managing Director of National Federation of Tourism And Transport Cooperatives of India Limited Sandeep Marwah recently visited Tashkent the capital of Uzbekistan to study tourism of the country. Talking to the press at Hotel Hyatt, Tashkent Marwah appreciated that Uzbekistan is attracting more Indians day by day. “ […] 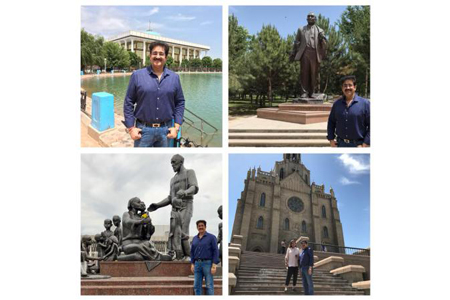