New Delhi: The Cultural Centre of Iran Embassy invited Sandeep Marwah President of Marwah Studios to discuss in detail the cultural affiliation with International Chamber of Media And Entertainment Industry.

“We have some concrete plans to develop and promote relations with the country of Iran, to start with a scholarship has been announced for the deserving student to learn cinema in short term course at AAFT- Asian Academy of Film And Television. It will followed by A festival of films and exhibition of Paintings from Iran at Marwah Studios,” said Sandeep Marwah President ICMEI.

“We will cooperate to our best and would love to have a very strong and long lasting relations with ICMEI,” said Dr. Ali Dehgahi.

Fri Jun 1 , 2018
New Delhi: Fifteen-member delegation of the Andijan region of Uzbekistan reached Delhi to discuss business with the members of business and service community at New Delhi. Sandeep Marwah Chairperson of Indo Uzbekistan Film And Cultural Forum was invited to speak to the delegates about the activities of the forum and […] 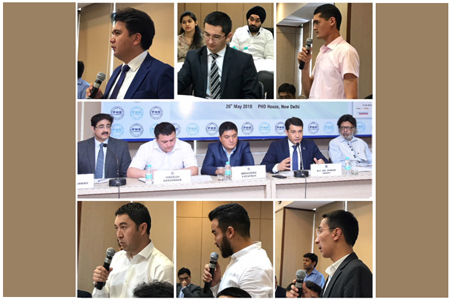